I credit myself largely to starting off their sisterly relationship on the right foot.  One ice cream sundae play dough play set, which one certain three-year old had been eyeing, was gifted “from” Vivienne about a week after she arrived.  “How did she know I wanted it?”an excited but confused Lily wanted to know.  “She’s your sister.  That’s how,” was the simple answer she received.

Lily has amazed us with her incredible patience and understanding, willingness to help and genuine love for her baby sister.  Her continual commentary always prompts a smile: “Mama, don’t forget my sister!” and “Mama, she’s crying again. (sigh and eye roll).”  and “Mama, she doesn’t like those cheese puffs.  Can I have them?”  Instead of being jealous or whiny or obnoxious, she would simply wait to receive attention.

What has perplexed me the most is that lately, the jealousy has been coming from the other side.  Now that Vivienne is almost 11 months old and able to maneuver through obstacles and get to where – and what – she wants to, I have a small, constant companion at my feet.  Being only 18 pounds and having a shriek that can pierce your inner eardrum, she is often hoisted onto my hip and carried about.  If I am interacting in any way with Lily, Vivienne zips right over and unleashes the demon within if I take no notice right away.

Tonight, dinner and play and bed time were all on me, as Jake was at work.  I was lying on the floor of the living room, giggling and cuddling and engaging in general silliness with Lily, when Vivienne decided she had had it up to here with all of the attention being paid to her sister.  Throwing herself on top of me, grabbing with an iron grip, she wept and screamed so incredibly that I thought she might start choking or possibly throw up.  She also batted at Lily with her angry little fist and tried to rip shreds of hair out of Lily’s head.  “Gentle!”I told her, maneuvering her hand to softly pat Lily,”Sisters are nice!”

And Lily, true to form, just shrugged the whole incident off as we were walking up the stairs to start bedtime.  I later heard her telling her sister, “Yes, Vivi, it’s hard to share. But we have to share the Mama.” 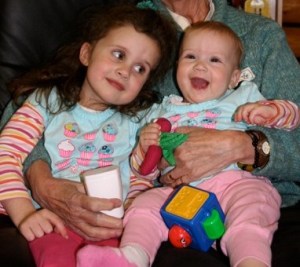 This entry was posted in Parenting, Siblings. Bookmark the permalink.